Archive for category Nutrition and Health

Posted by Jesse Thornton in Commentary, Nutrition and Health on March 11, 2015

Earlier this year Oklahoma State University released a summary of the results of an online survey polled from 1000 people in the US that tracks consumer concerns over food safety and regulation. From the polled sample, 82% supported mandatory labeling of food containing genetically modified organisms, or GMOs.  A real discredit to those fighting for GMO labeling was the finding that 85% also supported mandatory labeling of food containing DNA.  Strikingly, only 39% of respondents were in favor of a tax on sugared sodas, which is an issue that legitimately poses health risks to the US population as I covered in a previous article, and 55% support a ban on transfat, which also poses real health risks. END_OF_DOCUMENT_TOKEN_TO_BE_REPLACED

Posted by Jesse Thornton in Nutrition and Health on December 9, 2014

In a continuation of my coverage on artificial sweeteners, this post will be dedicated to one of the most controversial of them all: aspartame.  That’s because aspartame has been blamed for causing cancer and attributed to many other afflictions, which is evident in this chain email that circulated in 1998 during the early days of the internet.  In particular I remember the stories growing up, before I could even pronounce the word, that claimed aspartame causes cancer, and like many people, I automatically believed it was true.  I’ve dug through the scientific literature, there was a ton of it to look through…part of the reason it took so long for me to write this article.  Not surprisingly I’ve found that most of the claims are unsubstantiated by evidence, despite the fact that many of these studies are 20-30 years old – something that I do take issue with.  I did find some more recent compelling research, backed by a plausible mechanism on the potential neurotoxic effects of long-term aspartame consumption.  Those studies used large doses of aspartame, but were within the FDA acceptable daily intake limit, and I would urge you to read on for more context.  Aspartame may also have an affect on metabolic parameters related to diabetes and obesity, as well as composition of gut bacteria.  The evidence is conflicting, however, and many of these same issues are brought up surrounding other artificial sweeteners as well. END_OF_DOCUMENT_TOKEN_TO_BE_REPLACED

Posted by Jesse Thornton in Nutrition and Health on August 11, 2014

Artificial sweeteners are sugar substitutes that provide no nutritional value and are made by chemical processes, rather than naturally occurring in the environment.  As such, there’s always a lot of negative attention directed toward artificial sweeteners and indeed, anything labeled as “artificial.”  I’ve decided to do a series of articles on artificial sweeteners to find out what claims are true and what isn’t, instead of doing one article with a bullet point list.  There’s just too much information to condense everything into one article and I like to include as much context as possible because most things are not black and white issues, and this topic is no exception.  So the first article in this series will concentrate on what science currently has to say about the most widely used artificial sweetener on the market: sucralose.

Surcalose, best known as the key ingredient in Splenda, is a non-nutritive sweetener 600 times sweeter than sugar by weight.  The molecule itself is produced by a series of chemical reactions, starting with sugar as a base, then, stripping away 3 hydroxyl groups from the original sugar molecule and replacing them with chlorine atoms.  The added chlorine atoms make sucralose sweeter than sugar while also preventing it from being metabolized by the body.  This means that sucralose is not used as an energy source by the body and is simply eliminated as a waste product. END_OF_DOCUMENT_TOKEN_TO_BE_REPLACED

Hype and Potential Behind the Therapeutic Promises of Curcumin: From Alzheimer’s to Cystic Fibrosis

Posted by Jesse Thornton in Nutrition and Health on July 3, 2014 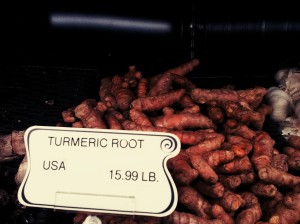 Turmeric is a root belonging to the ginger family, and like ginger, is used prominently in oriental cuisines.  Owing its yellow color to a compound called curcumin, the root is probably best known as the spice used in curries.  Like its ginger cousin, turmeric has been used for medicinal purposes for thousands of years.  I’m not entirely sure how we know the timeline or how much truth is in that statement.  Nonetheless, I will parrot that as truth since we as humans often have this immutable faith in the supposed medicinal value of things we pull out of the ground.  As it turns out, there does appear to be some real potential medical applications, not with turmeric itself, but with curcumin.  Some of the claims are hype, some of them show a lot of promise with a little more research, and there may actually be some benefit in taking curcumin now.

END_OF_DOCUMENT_TOKEN_TO_BE_REPLACED

Many new diets make claims that raw food, particularly vegetables, is better for you based on the assumption that our ancestors evolved to eat food that way and cooking destroys some of the nutrients.  As I write this sentence I am neutral on the claims made of consuming raw vegetables.  The claims do make sense to me because I know that heat tends to destabilize the structure of proteins, essentially rendering them inactive, and alters the structure of chemical compounds (please note I use the word chemical here in a general sense to describe naturally occurring chemicals, such as those made by plants, as well as synthetic chemicals).  But I also know that the process of digestion is designed to do exactly that.  With that said, does it even matter if you eat your vegetables raw if everything going down your gullet will be broken down to basic molecular units? END_OF_DOCUMENT_TOKEN_TO_BE_REPLACED

Last year I began having pain in my wrists and fingers making it difficult to use my hands, not only because of the pain but also because the joints would lock up and limit the amount of movement I had with them.  Initially, I thought it was just wear and tear over the years from the gym and playing sports growing up.  Then it started happening in my toes and feet and eventually around my ribs and chest cavity.  Some days I would feel completely fine, while other days I found it difficult to move and could only take shallow breathes due to the pain in my chest when my lungs expanded.  It was getting in the way and making it hard to be productive. END_OF_DOCUMENT_TOKEN_TO_BE_REPLACED